Play parts in stage, television, radio, video, or film productions, or other settings for entertainment, information, or instruction. Interpret serious or comic role by speech, gesture, and body movement to entertain or inform audience. May dance and sing. 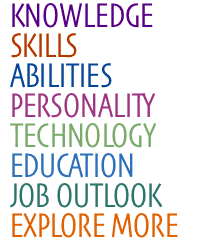 People interested in this work like activities that include ideas, thinking, and figuring things out.
They do well at jobs that need:
Read More

Get started on your career:

New job opportunities are less likely in the future.